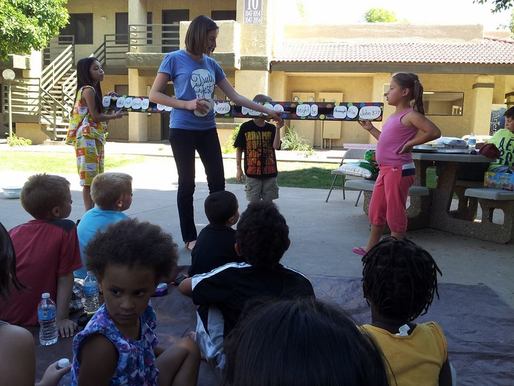 For the last nine months a team of Romanians and Americans have been going into three apartment complexes and sharing the gospel with the children that live there through stories and songs. After the story, there is also a memory verse that the children learn followed by a snack. These stories begin with creation, talk about the Patriarchs and Prophets, and eventually share about Jesus being the great Rescuer. The children seem to enjoy the stories and have been great about remembering the memory verse.

This idea was developed from Wayne & Drue’s time in Romania when they worked with a church that decided to reach out to Gypsy children in order to reach the families. It went well and several churches were planted as a result of simply telling children Bible stories. They decided to try that approach here. God quickly made connections  through a local Romanian church and a local American church. God orchestrated the coming together of the right people at the exact right time in order to help with this.

The outreaches have drawn many children, several of which are children in refugee families. There is a manager of one of the complexes that owns 17 other complexes that loves what we are doing and wants us to begin doing these outreaches  in each of the 17 complexes. The only thing holding us back at this point is that we need more teams!
Powered by